Things to Do in Tacoma: The Narrows Bridge

A Connecting Point in The South Sound

First Built in 1940, the Narrows Bridge has been a vital route for locals and industry for over half a century. It connects the Olympic Peninsula to Tacoma and the surrounding areas. There are plenty of things to do in Tacoma within site of The Narrows Bridge.  The area offers opportunities to enjoy culture, cuisine and the outdoors. Read on to learn a bit about the current attractions, the history and watch videos of Galloping Gertie’s plunge into Puget Sound and some great things to do in Tacoma.

Tacoma has a number of beautiful parks and areas that offer great views of the Narrows Bridge. One of the best spots to enjoy the water and a view of The Narrows Bridge is from the beach at Titlow Park.

Titlow Park offers playfields, ball-courts, forest trails, covered picnic areas and a playground. A short hike allows access to the beach and views of the Bridge.

Local bird watchers are often seen with their long lenses along the shores of Titlow Park’s duck ponds. Titlow Lodge, a former hotel built in the craftsman tradition, sits on the park property. It has been refurbished and is available to the public for events.

Within talking distance of  Titlow Park is Boathouse 19, which offers American cuisine, a full bar and its own view of the Narrows Bridge. Just up the road, off 6th Ave is the Tacoma Musical Playhouse, and one of our favorite spots to grab a donut, Pao’s Donuts.

READ: DRIVE THRU DONUTS IN TACOMA BUT BRING CASH

One of the best views o the Bridge can be found nearby at the War Memorial Park, which offers a unique view down the span of the Narrows Bridge 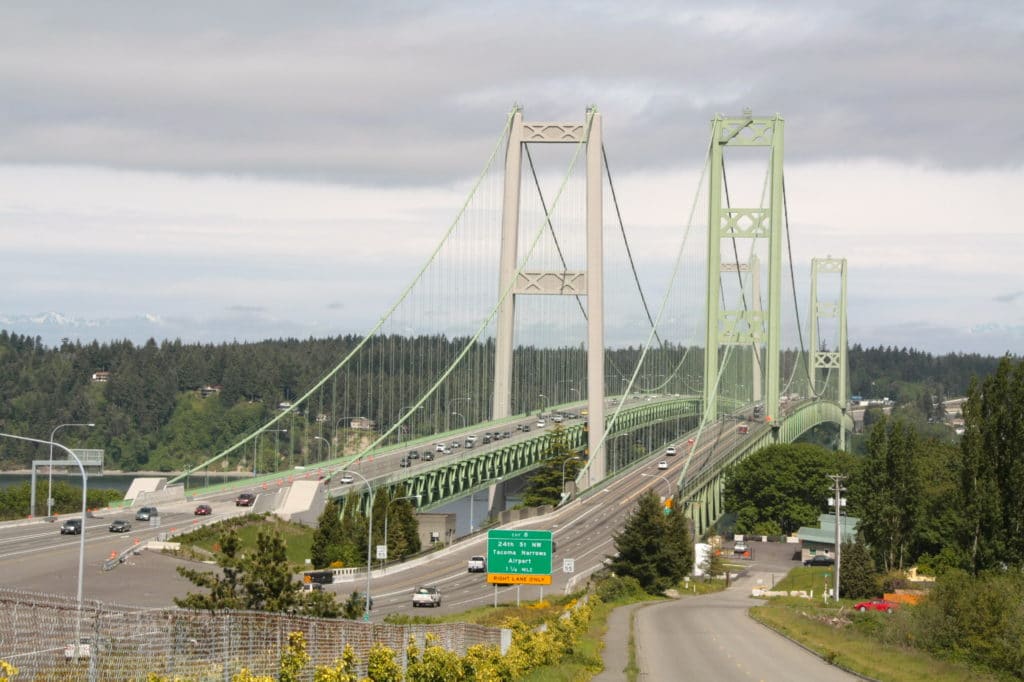 Visitors to Tacoma should always make a little time for Five Mile Drive in Tacoma’s Pt. Defiance Park. The park is the second largest City Park in the United States. It is home to a Marina, Zoo, Gardens, Restaurants, Beach and forest trails. (Click to learn which park is the largest).

Five Mile Drive offers a number of trails and parking areas that offer views of the bridge. Don’t be surprised if you see some deer or raccoons along the side of the road. Just remember not to feed the wildlife! If you do have a hankering to hand feed some critters, head into the Budgie exhibit at the zoo.

Across the bridge from Tacoma is the maritime city of Gig Harbor, which offers its own unique way to experience the waters of Puget Sound. The downtown area offers shopping, dining and views of he harbor an Mt. Rainier. Heart Rock Beach at Gig Harbor’s Narrows Park offers a great view from the western shore of the narrows (Click Here For Some of  The Best Restaurants in Gig Harbor).

Bald Eagles and Osprey patrol the waters below the Narrows Bridge, their nests in the nearby tree line. Below the surface are lingcod, salmon and octopi.

If you are lucky you might just see a pod of orcas or a humpback whale swim by. The whale population has been increasing in recent years, and with innovation of the cell phone camera, more and more folks are recording their experiences (  Check out this footage from 2017 ). Porpoises have been missing for many years, but in recent years, porpoise sightings are increasing.  Stellar Sea lions and harbor seals  are abundant in the area.

Along the shores are mule deer, raccoons and the occasional coyote. There is an an assortment of bird-life in the area including wood ducks, geese, cormorants and seagulls. 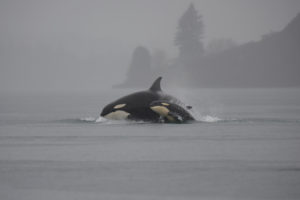 Whale sightings are increasing in the waters around The Narrows Bridge.

Experience The Waters of The Narrows Bridge

When looking for things to do in Tacoma, look no further than Sea kayaks and Stand Up Paddle-boards that are available to rent from a number of local beaches and businesses. Owen Beach in Pt. Defiance Park is one spot to find rentals in the Summer.

If you’d like a view below the surface, look into scuba diving! Cold water scuba Divers often take the plunge to inspect the waters and supports below the bridge. It’s advisable to have a boat, but some divers leave from nearby Titlow Beach, where grown men once wrestled octopi (click to learn more about the Giant Octopus of the Narrows Bridge).

Many locals enjoy the bounty of Puget Sound by crabbing or fishing the waters nearby. Make sure to check this map before clamming the beaches. If you are unfamiliar with the local waterways it may be best to charter a boat and hire a guide. This can make for a great experience as everything is taken care of, even the baiting of your hook! (Click here to charter a boat in Tacoma, WA)

If riding a bike is your thing, many folks enjoy a brisk ride along Five Mile Drive. Others will rent a bike or carriage from Wheel Fun Rentals at Point Ruston. Ruston Way offers a number of parking areas to stop and unload your own bike or take a walk to enjoy the waters and restaurants along Commencement bay.

History: A Tale of Three Bridges 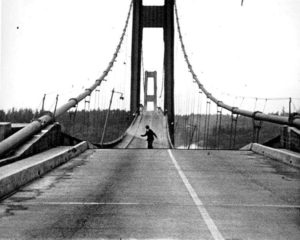 Howard Clifford runs from the buckling concrete of Galloping Gertie.

As you explore the area it’s always nice to know a little bit of the History.

Constructed between 1938 to 1940,  the first Narrows Bridge earned the nick-name Galloping Gertie, as it would jump up and down during windstorms. Just 4 months after opening, the bridge fell apart and crumbled into the waters during a windstorm (watch original news reel footage).

Reconstruction was stalled by the war efforts of World War Two. The second bridge was finally completed in 1950. This bridge currently holds the West Bound lanes of Highway 16. The third bridge, which supports the Eastbound lanes of highway 16, opened to traffic in 2007. Going east bound will cost you though  — click here for the current toll price of the Narrows Bridge. 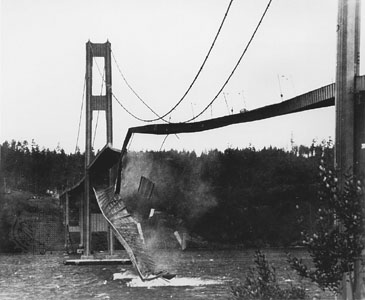 All three versions of the bridge are Suspension Bridges. The benefits of a suspension bridge are that it can span great lengths, can be built high above the water and is relatively inexpensive to construct. One major drawback is that the flexibility of a suspension bridge makes it susceptible aeroelastic flutter (that’s a mouthful!), which brought down Galloping Gertie, the original Narrows Bridge, in 1940 (Who’s to blame for the collapse of the Narrows Bridge?).

The first bridge was designed by Leon Moisseiff,  famous at the time for designing the Golden Gate bridge and several suspension bridges in New York.  The failure of the original Narrows Bridge affected him deeply. Sadly, Moisseiff died just three years after Galloping Gertie’s fateful plunge.

In 1992, Galloping Gertie’s wreckage was placed on the National Register of Historic places, to protect it from looters and salvage.  Watch “The Story Of The Tacoma Narrows Bridge 1938 – 1940” 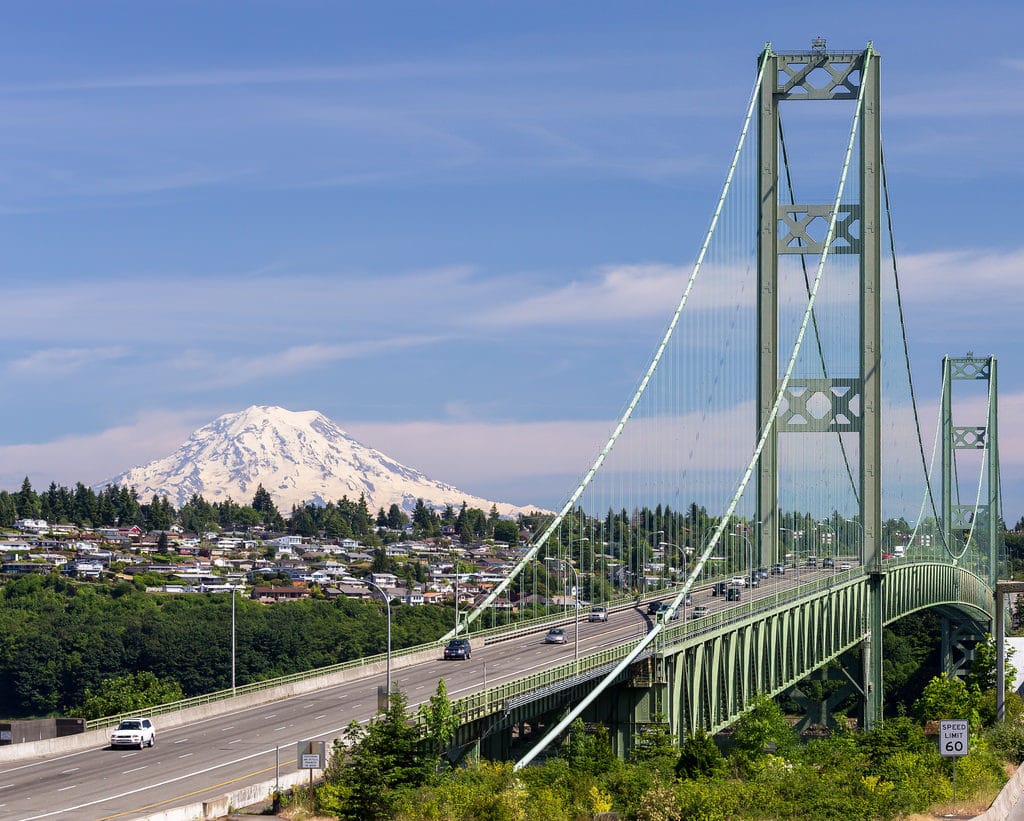 A view of  Mt. Rainier and the westbound lanes of The Narrows Bridge.

Highlighting the best in life and community, Clever Neighbor brings people together and provided resources for small businesses.

Travel in the PNW

Tacoma Frame Makers Gets Your Art on the Wall

Summertime in Skagit County is almost perfect one

The Oregon tourism industry is booming, and it doe

There are plenty of things to do in Bend during th

Bend’s food and drink has improved rapidly over

Central Oregon is well known for its outdoor recre

Summertime in Skagit County is almost perfect one

The Oregon tourism industry is booming, and it doe

There are plenty of things to do in Bend during th

Bend’s food and drink has improved rapidly over

Central Oregon is well known for its outdoor recre

As you may already know, there are plenty of thing

If your finding it hard to find some things to do